Digital change is the application of any aspect of information technology, to any aspect of an organisations value pyramid, at any level, to achieve a target business outcome.

Digital Transformation is where the process starts before destination is fully defined. The scope is significant with fundamental change to Models, Product, Process, Operations, Technology to meet Customer needs.

Digital Transition is where and existing way of operating replaced by known but different way. It occurs in a realistic timeframe and usually impacts specific organisation domains/sub-systems. It often includes changes to Models, Product, Process, Operations, Technology to meet Customer needs for the target domain (Sector, BU, Function etc).

Incremental Digital Improvement Focus is mainly improving something existing. The Current culture and practice will produce change. Acquiring capabilities to achieve it is practical. 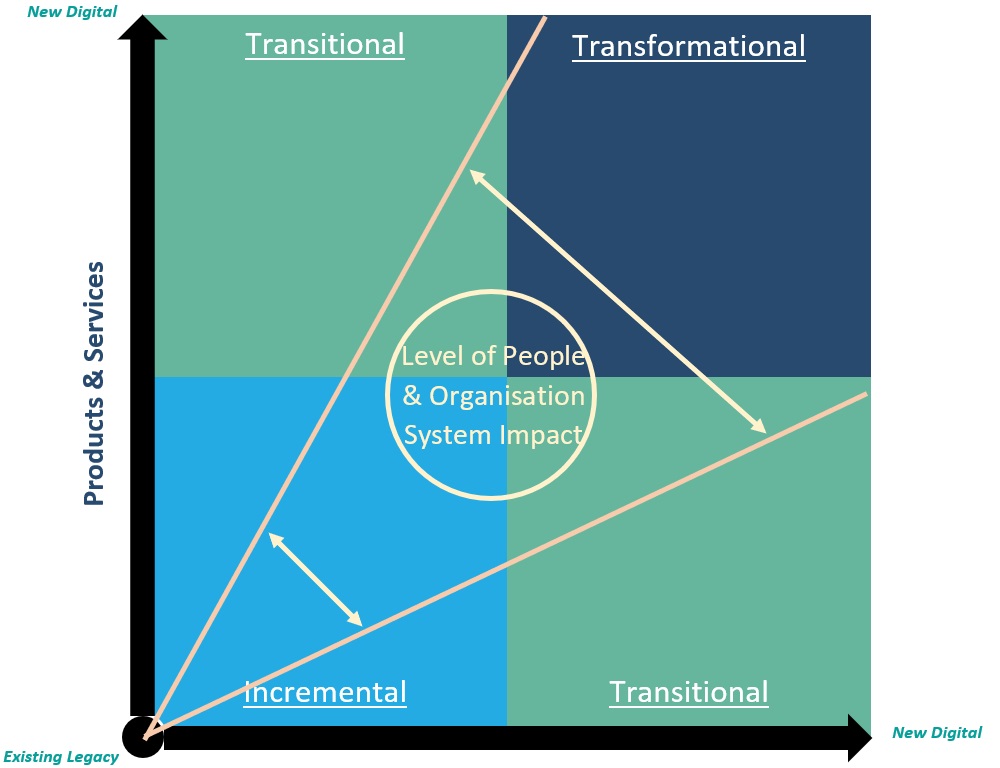 Non-technical leaders and professional play a key role in Digital Transformation, and though Information Technology Leadership and Professionals play a central role and are often the focal point. It is recognised that Digital Change and Transformation is an Organisation Change iniative which impacts many stakeholders and ecosystems. In order that non-technical leaders and professionals can engage and significantly influence the success of the change or transformation and to enhance the collaboration with IT a basic knowledge of the technology and language is extremely advantageous.

The success potential of any change initiative is determined by

By measurement of the current capabilities and their maturities using The Organisation Capability Maturity Framework OrgCMF™ Maturity Assessments and by using the OrgCMF™ reference model and body of knowledge the success potential for any change or transformation program can be significantly improved.

More specifically to the organisations Information Technology Function a similar Capability Improvement approach can be adopted normally led by the Technologists using IT specific Capability Maturity Reference models such as:

• The IT Capability Maturity Framework ITCMF

As we review the main digital technologies and methods, we will try to draw out their role’s as it relates to the end state business or operational process enabled by a machine/device enabled software application.

Software Stack; (refers to a group of software programs that work in tandem to achieve a common goal, each providing a specific function e.g. Web application)

Operating System; Manages hardware and software to provide common resources for the applications which run on the computing platform.

(Web) Server; a system that responds to requests across a computer network to provide, or help to provide, a network or data service.

Programming Language; a formal language that specifies a set of instructions that can be used to produce various kinds of output.

Virtual Reality (VR); a realistic and immersive simulation of a three-dimensional 360-degree environment, created using interactive software and hardware, and experienced or controlled by movement of the body" or as an "immersive, interactive experience generated by a computer".

Augmented Reality(AR); a live direct or indirect view of a physical, real-world environment whose elements are augmented (or supplemented) by computer-generated sensory input such as sound, video, graphics or GPS data.

Artificial Intelligence; any device that perceives its environment and takes actions that maximize its chance of success at some goal. Colloquially, the term "artificial intelligence" is applied when a machine mimics "cognitive" functions that humans associate with other human minds, such as "learning" and "problem solving".

(Data) Analytics; the discovery, interpretation, and communication of meaningful patterns in data in any digital media to achieve a specific goal. It includes predictive analytics and behavioural analytics.

A Platform; is a group of technologies that are used as a base upon which other applications, processes or technologies are developed. A personal computing platform is a modern laptop running Windows as an operating system. Another example would be an Apple computer running the Mac OS operating system, or mobile might be hardware that runs Apples IOS or Googles Android OS. A corporate Platform might be based on Oracle, or SAP technologies as another example.

Application Programming Interface (API); In basic terms, APIs just allow applications to communicate with one another. It is a set of functions and procedures allowing the creation of applications that access the features or data of an operating system, application, or other service.

Neural Network; a computational model used in machine learning, computer science and other research disciplines, which is based on a large collection of connected simple units called artificial neurons, loosely analogous to axons in a biological brain.

Block Chain; a distributed database that maintains a continuously growing list of records, called blocks, secured from tampering and revision. Each block contains a timestamp and a link to a previous block. By design, blockchains are inherently resistant to modification of the data — once recorded, the data in a block cannot be altered retroactively. Through the use of a peer-to-peer network and a distributed timestamping server, a blockchain database is managed autonomously. Blockchains are an open, distributed ledger that can record transactions between two parties efficiently and in a verifiable and permanent way. The ledger itself can also be programmed to trigger transactions automatically.

Social Media; are computer-mediated technologies that facilitate the creation and sharing of information, ideas, interests and other forms of expression via virtual communities and networks. They have evolved to become business platforms for creating and/or engaging in eco-systems, promotion, sales and delivery of products and services as well as enabling collaboration internally and externally in an organisation or as an individual or interest group.

Digital Media; normally refers to data and information format, the means of storage, and/or presentation and interaction between the end user and the digital data/Information such as Text, Graphic, Animation, Audio, Video, on any digital device or transducer. (EG web, Tablet, PLC,. Doc, PDF etc).

Big Data; a term for data sets that are so large or complex that traditional data processing application software is inadequate to deal with them.

Cyber Security: (IT Security); is the protection of computer systems from the theft or damage to their hardware, software or information, as well as from disruption or misdirection of the services they provide.

Botnets; are networks made up of remote-controlled computers, or “bots.” These computers have been infected with malware that allows them to be remotely controlled.

Robot(ics)-Droid; is a machine, often one programmable by a computer, capable of carrying out a complex series of actions automatically. Robots can be guided by an external control device or the control may be embedded within. Robots may be constructed to take on human form but most robots are machines designed to perform a task with no regard to how they look. (Drones and autonomous vehicles can be included here). It can be software and/or hardware.

(Intelligent/Connected) Machine; a tool or device containing one or more parts that uses energy to perform an intended action (s) that has electrical/digital connectivity to other devices.

Internet of things; refers to the connection of any physical item (component, device, machine, subsystem, system) to other computing resources that can provide input, receive output, process and/or take an action. Expanding the scope of software applications to include control of “Things”.

Transducer; is a device that converts a signal in one form of energy to another form of energy, a sensor is a transducer. A sensor is a converter that measures a physical quantity and converts it into a signal which can be read by an observer or by an (today mostly electronic) instrument.

Device; is a constructed tool of any type in any of the core sciences and across the sciences, sensors above are devices, many sensors combine chemical processes with physical or electrical property changes that can be measured to indicate the target measurement dynamic and magnitude. In IT Device often means a physical electronic device, such as a Phone, PC, Tablet, Server, Sensor, Server, Car (connected) etc.

(Computer) Network; a telecommunications network which allows nodes to share resources. In computer networks, networked computing devices exchange data with each other using a data link. The connections between nodes are established using either cable media or wireless media.

Cloud; a set of private, public or hybrid computing resources available to authorised users via the internet on an as needed basis which are dynamically scalable, and user often pay as they use the resources.

**(PaaS) Platform as a service; relates to access to and use of specific software stacks, which usually reside on an IaaS.

**(SaaS) Software as a service; relates to access and use of specified software applications and/or functionality.

Central processing Unit (CPU): This is the main processor comprising of electronic circuits which performs functions and calculations as instructed, that are derived from software. Sometimes referred to as the Microprocessor silicon ship or related circuit board containing the electronic components.

Storage: A Computer System has several types of storage; The main storage is computer memory, which are silicon ships that contain the circuitry that store the binary software instructions and data that the CPU uses for processing, these are high speed dynamic access storage units. Other key storage units are hardware units with significantly higher storage capacity, which contain all the software stack and Applications and related data, these units may be magnetic hard disks, Compact Disks, and Solid-State silicon chips.

Power: Computing Units are electrical devices that require electrical A/C power, which is converted to the required A/C & D/C lower voltages required to operate the electrical components that enable them to function correctly.

Digital Twins; A dynamic software model of a physical thing or system. Using physics data on how the components of a thing operate and respond to the environment as well as data provided by sensors in the physical world, a digital twin can be used to analyze and simulate real world conditions, responds to changes, improve operations and add value. Digital twins of physical assets combined with digital representations of facilities and environments as well as people, businesses and processes will enable an increasingly detailed digital representation of the real world for simulation, analysis and control.

Mesh; Refers to the dynamic connection of people, processes, things and services supporting intelligent digital ecosystems. As the mesh evolves, the user experience fundamentally changes and the supporting technology and security architectures and platforms must change as well.

DevOps; a term used to refer to a set of practices that emphasize the collaboration and communication of both software developers and information technology (IT) professionals while automating the process of software delivery and infrastructure changes. It aims at establishing a culture and environment where building, testing, and releasing software can happen rapidly, frequently, and more reliably.

Agile (Development); a set of principles for software development under which requirements and solutions evolve through the collaborative effort of self-organizing cross-functional teams. It advocates adaptive planning, evolutionary development, early delivery, and continuous improvement, and it encourages rapid and flexible response to change. 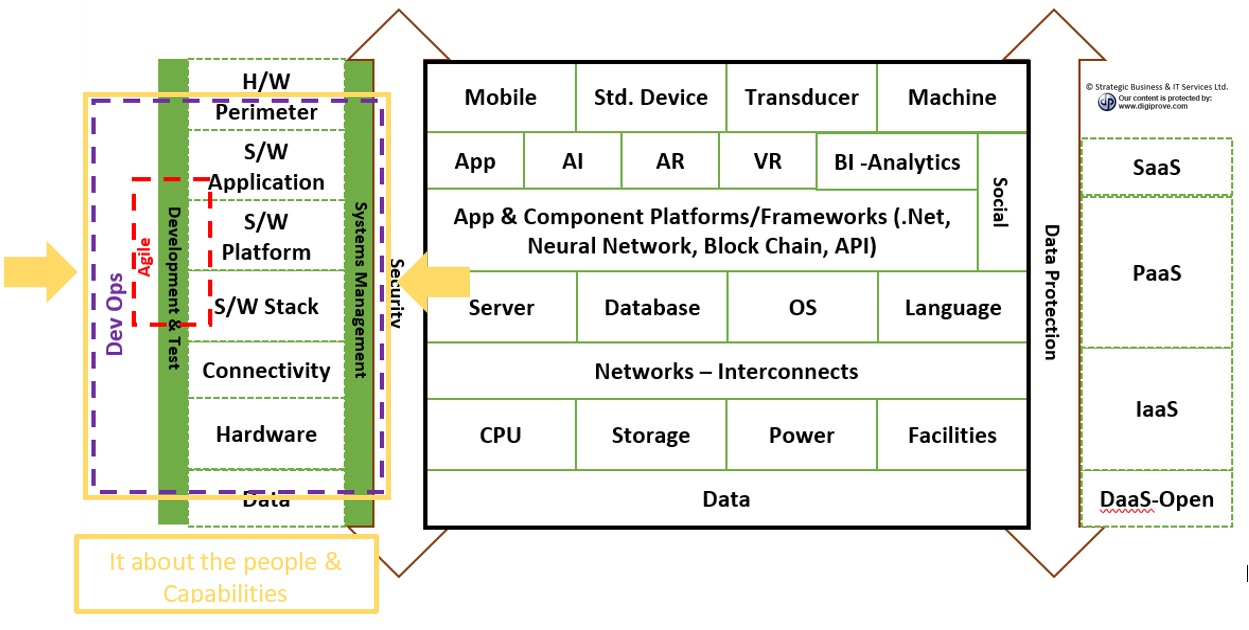 Backbone (Infrastructure); Most often refers to the core IT Infrastructure that supports the deployment of an organisations digital services and applications (data centres, Servers, Networks, Standards, Platforms, Tools). Existing organisations will have legacy backbones.

Legacy Systems; usually refers to the existing and/or past computing resources and technologies in use in an organisation or ecosystem. It includes hardware, software, architectures, records, methods, data etc.