Most studies indicate that a minimum of 70% of Merger and Acquisitions fail to achieve the expected synergies (McKinsey), or expected value (abysmal failures, Harvard Business Review). There are many reasons why they fail to deliver, most often quoted deficiencies are: -

Research indicates that the use of a Capability Maturity Reference Model and related tools as a component of the M & A process, can significantly increase the success potential for the M & A transaction.

It does this by providing an independent, objective and normative reference model maturity level assessment for both organisations. The scale and the scope of the assessment is configured to assure the M & A Leadership team that they have data points, that indicate the compatibility and synergies between the organisations' and, the gaps that need to be addressed to reduce failure to perform 'risks' during and after the transaction.

Issues arise when the capability maturity level for one or more of each organisation’s dynamics are not at the same level. The same can be said for restructuring even within one organisation.

We also now know that even if both organisations have dynamics that are at the same level, if they are both in the lower half of a scientific capability maturity scale (Disintegrative) the integration will present significant challenges and will need careful planning and management (Underpinned by the rules of Dynamic Systems Maturity Theory (DSMT)). 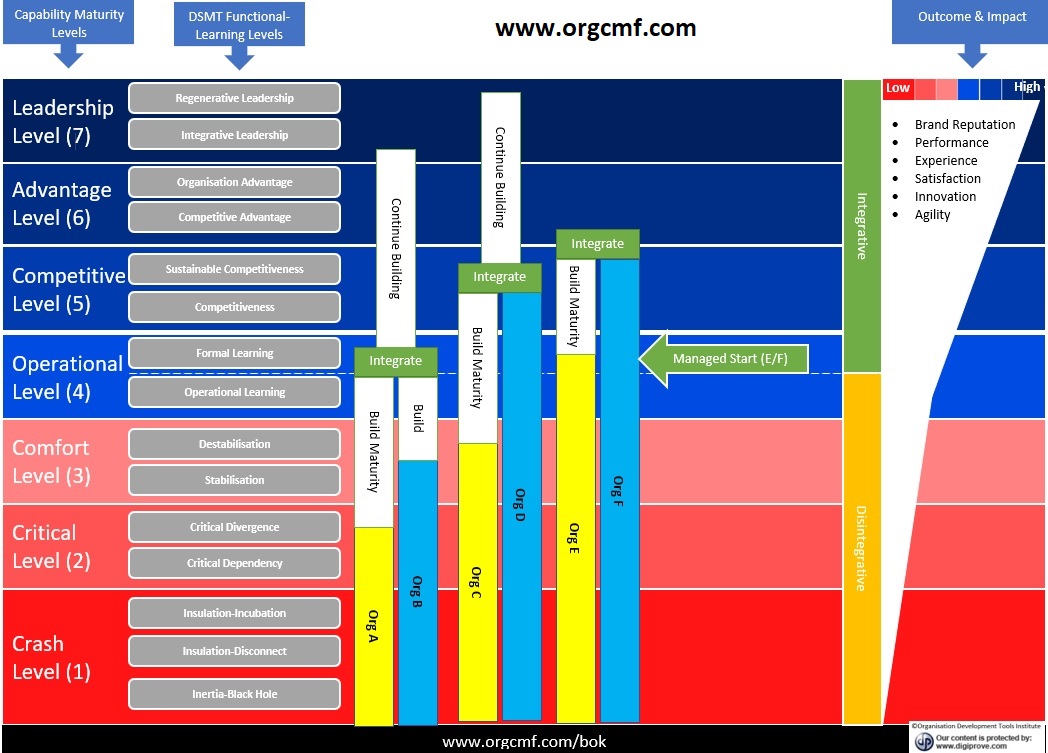 So if you are selling or buying, both parties can increase the long term success potential of the transaction, by assessing the Capability Maturities for all key dynamics in both organisations and allowing for adding any missing capabilities, while building the maturities to an integrative level, and aligned at the highest integrative level possible using a model such as the Organisation Capability Maturity Framework or other equivalent scientific maturity model.

Used correctly the OrgCMF™ is a powerful addition to the tool kit of those responsible for M & A Strategy and Execution. It provides data and information at ‘Due Diligence’ that informs the transaction decision and subsequent planning for those transactions that will proceed. Equally as important it can guide the ‘Integration’ managers and teams in planning and executing 'the bringing together' of two organisations, teams, units. 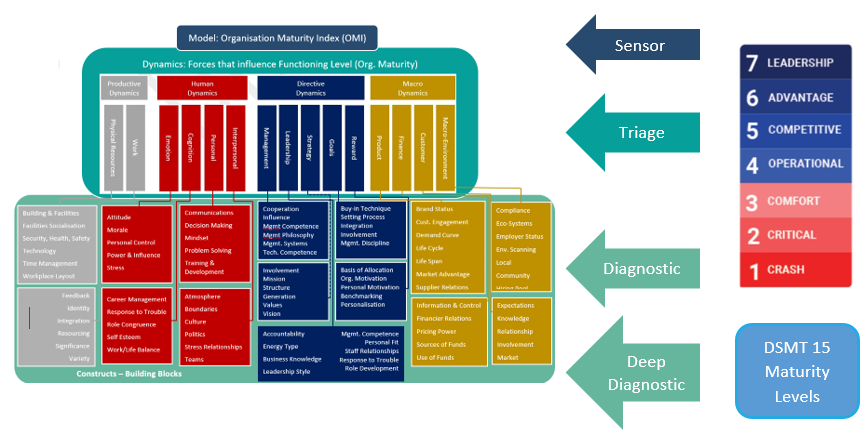 A word on ’Culture’; since the cultures that have been modelled actually map onto the Stages of Habituation/Maturation in the OrgCMF™ model, we can treat Culture Change like any other type of change and as simply part of any change insofar as it is assessed/diagnosed and put through the same DSMT developmental process, so that we can say that change through OrgCMF™ is no longer bound by Culture, but instead that Cultural Development supports specific Change.

Adoption of a Capability Maturity Reference Model and Framework is a low cost and high value addition to help reduce the risk of M & A transactions failing to perform.

It brings a language and, an independent and objective measurement process, where people and teams can work with to manage the complexity, of planning and executing integration.

It strengthens the M & A process overall, because it guides improvements' that reduce the deficiencies identified above by:

Initial assessment and action guidance should start pre, or during due diligence using on-line maturity assessment tools available on www.orgcmf.com. But it’s never too late to adopt a Capability Maturity Framework as a significant aid to overcoming M&A integration challenges.